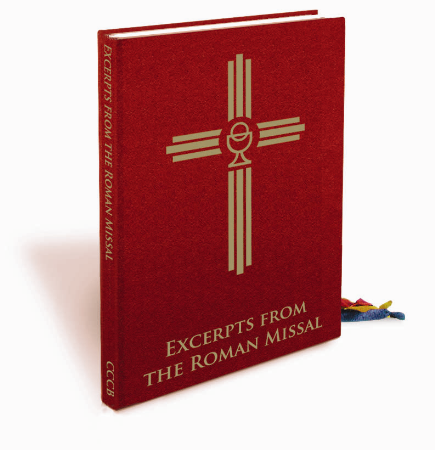 EXCERPTS FROM THE ROMAN MISSAL

Excerpts from the Roman Missal has been long awaited. For priests, it serves as an alternative to the Roman Missal at the Presider’s Chair. It is light, smaller in thickness than the Order of Christian Funerals and the same dimensions as other ritual books published by CCCB Publications.

The print contrast has been improved from the Roman Missal and the font is substantially larger than the Chapel edition. Another great addition to this publication is the inclusion of options for the third form of the Penitential Act.

·  The Order of Mass
o  The Introductory Rites
o  Niceno-Constantinopolitan & Apostles’ Creeds
o  The Concluding Rites
o  Blessings at the End of Mass
o  Other:
§  Sample Invocations for the Penitential Act
§  Examples for the Universal Prayer
§  Rite for the Blessing and Sprinkling of Water

·  Proper of Saints (Solemnities, Feasts and Special Days in Canada)

EUCHARISTIC PRAYERS FOR MASSES WITH CHILDREN