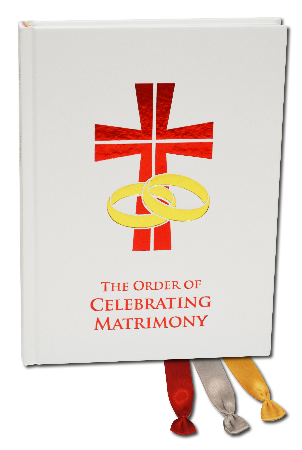 ORDER OF CELEBRATING MATRIMONY (THE)

The Order of Celebrating Matrimony for use in Canada is a translation of the Second Edition of the Latin Ordo celebrandi Matrimonium of 1991. "It is the sole English-language translation and version hereby permitted for use in the Dioceses of Canada immediately upon publication. Its use is mandatory beginning September 8, 2017."

There are a number of substantial changes from the original 1969 edition. This latest edition has an expanded Praenotanda (Introduction) which expands upon the Church’s theology of Marriage.

Some changes and additions include:
The Appendices include:

Each copy also includes Pastoral Notes provided by the Episcopal Commission for Liturgy and the Sacraments and a laminated card with the French version of “The Consent”.

The Episcopal Commission for Liturgy and the Sacraments has prepared Pastoral Notes to assist Priests, Deacons, Assisting Laypersons, other assisting liturgical ministers (such as musicians and cantors) and all others charged with helping prepare couples for the “Order of Celebrating Matrimony”. One copy of the Pastoral Notes is included with every ritual book.

ONE LOVE - A PASTORAL GUIDE TO THE ORDER OF CELEBRATING MATRIMONY

A GUIDE TO CATHOLIC WEDDINGS: Q&A FOR COUPLES